I am in the process of watching some online videos of Moshe Feldenkrais doing he called in later life "Functional Integration."* And I was fascinated by the lengths Moshe went in the session to make the client comfortable while he was in a lying position on the table - and -
to make the person ready to receive the session. I took a few screen captures of the beginning of the video so that you could check it out. I would love to share the actual video but it is copyrighted and I cannot do so.**

Below is one of Moshe's first attempts to have the person lying face down on the table. You would be correct to ask, "Why would he put the man in such an awkward position?" One of the reasons is that the posture is similar to how the man stands and walks. See the photo above. Moshe wants to improve his standing and walking and is doing his best to simulate that position on the table. 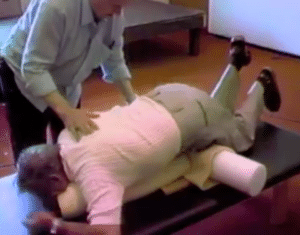 Below Moshe added a second blue pad that was taken from the man's wheelchair. He was, again, attempting to make the position more comfortable before beginning the work and (to repeat) give him access to work with his movement patterns during the session. 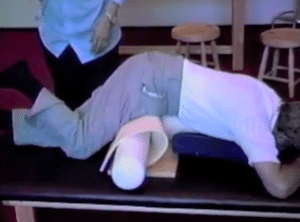 For a few moments Feldenkrais explored the idea of having the man in all fours and added even more padding. 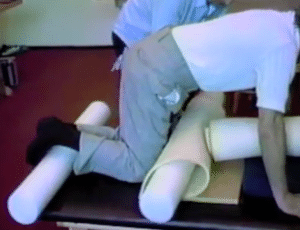 For those of you doing some form of Feldenkrais-based table work, have you ever used pads and rollers to such a great extent? And to those of you doing group or individual audio sessions, remember to make yourself comfortable with padding so that you can get the most from your sessions 🙂

*I call "Functional Integration" what Moshe did when he first started developing the work, that is, "the hands on work."

** The video are only available to members of the IFF. You can access them here: IFF Video Collection.