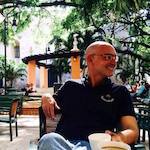 Awareness is the goal. Feldenkrais is a tool.

I am not in the business of teaching "Feldenkrais®." I teach awareness. Feldenkrais-based movement sessions such as the ones I sell on my download store are designed to help you achieve specific goals such a getting rid of back pain, tmj pain, breath easier and better and to have more potent use of your body. These are sensory-motor learning processes. And they help you organize your physical movement. I think of them as "movement through awareness" not "awareness through movement" as Feldenkrais called them.

I feel my phrasing is more grounded. You can radically improve your movement-ability by bringing awareness to your bodily movements and sensations and engaging in highly unique Feldenkrais movement sequences or "exercises" as some people like to call them. Feldenkrais can teach you how to move easier, freer, and without pain.

However, Feldenkrais and the work itself does NOT teach people to be more mature and emotionally independent as some think.

If Feldenkrais and his work truly brought his students to a more mature and individuated state as he thought, one would have to explain the behavior of him and many of his direct students in the Feldenkrais training community who have abuse allegations against them. As I wrote about in 2020, there are many allegations of sexual harassment and abuse that go back to the 1980's. And to date, none of the abuse allegations have been made public.

Feldenkrais For Pain and Strain Relief

You can use Feldenkrais strategies and sessions to evolve yourself. To let go of chronic pain. To move into life.

And you can do so in the safety and comfort of your own home. Without "credentials," without paying for expensive trainings and without accepting anyone's ideology or other limitations. Feldenkrais belongs to you the moment you start using it and learning from it.

I do everything that I can do to share Feldenkrais sessions and strategies in a way that respects people's ability to use and benefit from the work. I am a member of no Feldenkrais organization and accept no limitations on how I - or you - use the work, as long as it is respectful to life and people's own needs. - Ryan Nagy

Since 1996, I have been teaching and sharing the work of Moshe Feldenkrais in settings as diverse as drug rehabilitation centers, universities, private classes and workshops and online.

And when I started doing Feldenkrais, I did not go to a workshop or training. I learned it on my own. Apart from the fact that I had no money, my fear and anxiety prevented me from attending group Feldenkrais classes.

So what did I do?

I read a Feldenkrais book and did the exercises in it. It was the Awareness Through Movement book by Moshe Feldenkrais. My life started changing almost immediately. I started to get over my fears and anxiety (though I still had a LONG way to go). So - before I had so much as taken ONE class or done a Feldenkrais session with a practitioner, I had already experienced transformation. And this from just reading and doing "exercises" in a book! And you know what? Half the exercises I did wrong. But it did not matter. I had begun to change. Even though I was not consciously aware of how deep the changes were to become.

When I later began to take formal classes and workshops - I have to admit - I was confused by the teachers and the people that I met there. The training environment seemed very religious and cult-like. The trainers spent WAY too much time speaking about how wonderful the method was and WAY too much talking about Moshe and what it was like to train with him and know him. Quite frankly, I did not care. And I still don't. The work is not about Moshe Feldenkrais. The work is about YOU. It is about we the people doing the work and using the work.

Feldenkrais tranings were (and still are) extremely expensive. I started the process in 1994 and it was $3400 per year. A "year" is about 30 days of training. Why so much? It seemed a ridiculously high price.

Given how much my life had changed before taking a Feldenkrais training and how skeptical I was of the training process itself, I decided to get more formal education. My biggest desire was to keep developing as a person and to keep developing my independence. I felt quite strongly that I needed some type of credential that meant something in the real world (not the Feldenkrais world) so I went to college. It was an amazing experience, getting a broad-background in psychology and human development, eventually achieving both a Bachelor's and Master's degree and starting doctoral studies.

There is much more that I can and will write about that. For now, I want to tell you that my mission is to get Feldenkraisian ideas into the hands of as many people as possible and with the fewest restrictions as possible. I want people - I want you - if you want - to use Feldenkrais strategies in the ways that are of most benefit to you and those around you.

Feldenkrais is not mysterious. Though it can have wonderfully mysterious effects on your life. Feldenkrais is not religion. Though some have a religious intensity in how they teach it. And that is fine. I suppose. Thought it sure as hell is not for me.

You have the right to use and benefit from Feldenkrais in any way that is useful to you and pleasing to you. - regardless of what anyone else may try to tell you, Feldenkrais is not owned. Movements cannot be owned. Yes, some people have legal-standing (at least for now) to use certain terms such as "Feldenkrais Method®" Good for them. But you can use and teach any - ANY - Feldenkrais-based movement sequence. And as long as you do not violate other people's legal rights, you can start and conduct your own trainings and workshops. (Though, of course, you must take into consideration local laws and regulations.)

Some Background
I have spent more than 27 years of my life working intensively with the work of Moshe Feldenkrais, Milton H. Erickson, and with many well-known people in the field of somatics and psychology. Along the way, I got a Bachelor's and Master's in Developmental Psychology, taught at several Universities, became "certified" in the work of Moshe Feldenkrais, and lived and traveled in many countries. Ultimately, I ended up in Mexico where I run my online businesses and continue to deepen my knowledge of change. I teaching and write about some of what I know on this website. Not all experiences can be put into words, though we can make the attempt when useful.

For many years on this blog, I have been focusing primarily on the work of Moshe Feldenkrais. And I am pulling together my various writings on the history of Feldenkrais on this page: Feldenkrais History.

However, the work of Feldenkrais is only one of the major influences of my life. Others include Milton H. Erickson and his many students and intellectual heirs. Others include my graduate studies psychology and a life-long interest in travel which has sent me all over the globe. Feldenkrais is a major driver of what I do and where I go, but it is certainly not the only one.

Feldenkrais, though very powerful, can not do everything. There are limitations with the work itself and what it can do. For example, people who have been traumatized (as I was) very often need to supplement Feldenkrais with other modalities such as psychotherapy, Somatic Experiencing, and other methods of releasing and healing trauma.

There are also some major limitations with the social and legal implementations of the work. That is, how the work has been transformed and limited by people who want to control and profit from it. I have spent many years lobbying for more open access to Feldenkrais materials. But when all was said and done, I found it more efficient and effective to release materials here on ryannagy.com and do my best to share the work.

The hands-on work (sometimes called Functional Integration), and verbal sessions (sometimes called Awareness Through Movement) are often massively transformational. As I wrote about in the blog post Sex, Drugs and Feldenkrais I was able to create deep and lasting change in my life by the self-application of Feldenkrais sessions. At the beginning of my journey, I had little money, so I would just buy used copies of Feldenkrais books and read the sessions out loud and do them. Later I would read Feldenkrais transcripts into my computer's recording program and listen and do those sessions.

But be careful - sometimes you need more than what Feldenkrais can offer. Get whatever help that you need to create the change and life that you want

I have seen little evidence that Feldenkrais always directly to psychological and emotional independence, but the work is powerful. Other related ideas are needed
.
Some unconscious processes and habits are not touched by Feldenkrais. Habits of thinking, emotional dependency, economic dependency, confusion about life and society - and many other factors - that cannot be reached simply by working with sensory-motor processes. These ideas are the subject - both directly and indirectly of many posts on this website

A Bit More of Ryan's Background

I am former drug dealer and drug addict. I have been homeless and spent many months living in my car and sleeping on the beach and in national forests throughout the United States. Abuse, pain, depression? Yes, I have been there. And sometimes I slide back into feeling bad. But it happens less and less these days.

I left the United States on September 1st, 2010, having spent several years after a Feldenkrais training getting a Bachelor's and Masters in Developmental Psychology, doing some work towards a Ph.D., creating a Feldenkrais practice, and learning and traveling all over the world.

I was able to leave the U.S. because I developed online passive income streams and created the ability to support myself by working online through the internet. I make passive income selling Feldenkrais mp3 downloads and from my online psychotherapy conferences, a venture that I run with Rob McNeilly one of Milton Erickson's students.

Living abroad has been amazing...most of the time. I speak Spanish, have crazy Mexican adventures and manage my various online business interests.

If you want to keep up with what I do, and learn how to expand your practice and diversify your business, thoughts and income streams, consider joining my email list:

This site uses Akismet to reduce spam. Learn how your comment data is processed.

I use cookies to ensure that I give you the best experience on my website. If you continue to use this site I will assume that you are OK with it.OkPrivacy policy