I was having a WhatsApp conversation with a friend of mine recently and we were both giggling like kids about the tendency for people in the Feldenkrais world to build their "brand" around a connection (real or imagined!) to Moshe Feldenkrais.

I am not criticizing anyone.

It happens in many communities that are built around the personality of one man or woman.

In the Feldenkrais world, you will often see people saying things such as:

"I was personally trained by Moshe Feldenkrais"

"I was a close colleague of Dr. Feldenkrais"

Recently, I have seen two of Moshe's students add the friend label, as in,

"Well, you could say we were friends."

(From my perspective, it tends to get weird when some people talk about being, "Moshe's traveling companion." What the hell is that supposed to mean? But I will leave that conversation for another day.)

So my friend, who has a slightly diabolical mind like mine - sent me a picture from the Feldenkrais Amherst training that started in 1980.  It was a training with 253 people in a gymnasium.

And as we were talking about a particular Feldenkrais trainer, my friend wrote about the picture, "look! There he is, being personally trained by Moshe! Can't you see him?"

And I have to admit, that I couldn't. 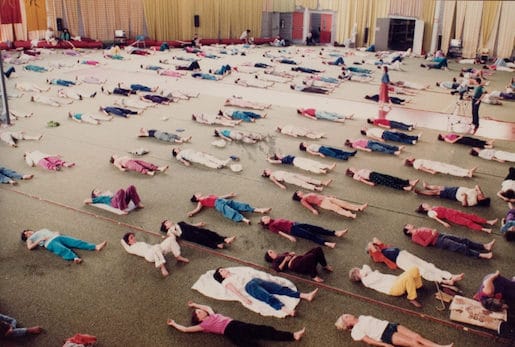 The image copyright is owned by the International Feldenkrais Federation.

I am using it without their permission for shameless self-promotional purposes.

If you want to see more, check out the online archive that they have generously put online.

It can be fun to see Moshe holding court in his trademark blue polyester shirt!