This page on the history of Moshe Feldenkrais is primarily about Feldenkrais and his attempts to codify and train students in what he considered to be "his work." I have blog posts on the Feldenkrais training history going back to about 2004, but not all those posts are indexed here, just yet.

I am updating the page today, March 31st, 2021 to include some of my recent writing regarding the various allegations of abuse and sexual harassment that have come to light in the last several years.

This first post, allegations of abuse in Feldenkrais training programs was published in December of 2020. I published it with a sense of resignation as it was clear that no one else in the Feldenkrais community was willing to talk about it publicly. Next up, Feldenkrais®: Awareness and Abuse

Moshe's first group training was in Israel with 13 people in 1969-1971 many of whom had been doing the sessions at the Alexander Yanai studio (see below). According to Ruthy Alon, the group was limited to 13-people because that was the most that could fit comfortably in his training room!

The Amherst Training 1980. Amherst training flyer. Moshe started this training program but became ill in October 1981 and was not able to return from Israel to teach. He asked several people to finish it for him. You have likely heard the term "Feldenkrais Trainer." It is a term that Feldenkrais never used. The first time I have seen it in print was by Jerry Karzen. Jerry was "Moshe's traveling companion" and the organizer of the Amherst training. Here is a blog post with a link to a faxed letter by Jerry Karzen with some interesting tidbits:

To me, one of the most interesting parts of the letter is the use of the term "trainer." And the fact that the first person to designate people as official trainers was not Moshe, but Jerry Karzen:

Given that Jerry Karzen had little experience teaching Feldenkrais, one might wonder what his criteria were for choosing other "trainers." If he was not an experienced teacher and did not know what effective training was, how could he choose other trainers? In 2017, Jerry quite honestly noted that he did not understand what he was doing when he himself was training:

"When Moshe made me a trainer, I didn't know what the hell I was doing. I played the Amherst tapes in their entirety for at least twelve training programs."

And that is wonderful. Kudos to Jerry Karzen for having the courage to say that publicly. But again, by what criteria other than happenstance and being Moshe's "traveling companion" does the Feldenkrais community now have a hierarchy of Feldenkrais trainers? It seems that the criteria for becoming a Feldenkrais trainer was being one of Jerry Karzan's friends from the San Francisco training.

Alexander Yanai Sessions (1950 and beyond) 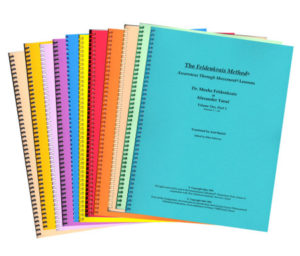 Feldenkrais taught group Awareness Through Movement sessions in his studio on Alexander Yanai Street in Tel Aviv, Israel starting in the mid 1950's. Many of the sessions were recorded on reel-to-reel tapes, which was cutting-edge technology at the time. Feldenkrais recorded and edited the sessions until he got them exactly how he wanted them. And his students would do the sessions via the tapes in the studio.

After Moshe's death, the tapes were transcribed into written Hebrew, the language in which he taught in Israel. And later the transcriptions were translated into English and published as the "Alexander Yanai" sessions. When you hear people in the various Feldenkrais communities talking about the "AY" or "Alexander Yanai" sessions they are talking about sessions based on those tapes and transcripts.

An interesting idea to consider about the Alexander Yanai sessions is that Feldenkrais rarely corrected anyone. He would most often let students make whatever sense they could of his instructions and he would simply watch. Though you can see from reading the Alexander Yanai transcripts that Moshe would occasionally get frustrated with what he was seeing and called people out, "Oy Vey!."

To me, Ryan Nagy, the Alexander Yanai sessions represent a very fertile time in Moshe's life. He was experimenting with how to teach his work and what particular instructions and movement ideas were important to teach. You could consider the sessions experiments where Moshe put his ideas into practice and saw how people responded. I record and share many sessions based on the AY sessions on my Easy Feldenkrais site.

Update: April, 12th, 2018. I had a phone call with Frank Wildman on Jan 12th, 2018 and he gave me some new historical content regarding the AY sessions. Moshe's early American students (from the Amherst and SF Trainings) did not know about the existence of the Alexander Yanai Reel-To-Reel tapes. After Moshe's death, in meetings with attorneys from the Feldenkrais Foundations, Mark Reese asked about the big steel cabinets in the office and was told they were tapes from Moshe's classes at Alexander Yanai. And that is how they were discovered. Mark and others demanded that the lawyers release them. And they did. There is more to the story, I am sure. But that is what I have for now!

Feldenkrais taught for five and a half weeks in 1972 at the Esalen Institute in Big Sur, California. My impression from reading people's accounts of the workshop and Moshe's teaching is that it was a "big deal" for him. He felt it was a sign that he and his work was finally getting more attention. My personal interest in the Esalen workshop came from online conversations with Deborah Elizabeth Lotus and Ellen Solloway. Both are experienced practitioners and they explained to me how much care Feldenkrais took in selecting the sessions that he taught. I quickly found the transcripts from the workshop and began to record the sessions. At first, the recordings were only for my own learning and development. And later I created my Feldenkrais Classics series based on the Esalen workshop and I began to share them.

Much more to come.

Allegations of Abuse in The Feldenkrais Guild Trainer Community