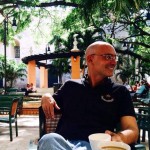 The first year in which I brought in over 100,000 dollars from my various online ventures was 2013. I remember it very distinctly as I massively underpaid my taxes and had to come up with a large tax payment very quickly! I brought in over 100K last year (2014) and in the year that is coming, I am on track to "hit it out of the ballpark" as the Americans like to say.

The World Needs Your Work....

When I first started doing podcasts years ago with people in the Feldenkrais community, I did not have any idea where it would lead me. I had not yet released my first Feldenkrais products that would earn me tens of thousands of dollars. I had not yet created my business organizing online conferences for psychotherapists and psychologists which would connect me with thousands of people all over the world. I had yet to leave the U.S.A and fulfill my life-long dream of living in a foreign country and learning a second language... in fact it had not even occurred to me to do any of those things... at least not consciously.

There Is One Key Thing You Need to Do...

I did however, do ONE thing right that allowed me to massively grow my influence and have an impact on the world. And I did it very well and continue to do so. And even though I have made some mistakes over the years, that one thing has continued to pay dividends for me, my business partners and friends...and for the Feldenkrais Method itself.

What is that one thing? Well, let me say it simply:

You need to have people reading your website, following your Facebook page, and checking to see what you are up to.

By the way - What’s so special about Feldenkrais practitioners who are able to build large followings and have a large influence in the community?

The answer is nothing. No offense to my talented friends who do good work. But they (and I) are not all that different from you. In fact, you may be even more of an expert. Many of you are certainly more talented at the Feldenkrais Method and have more knowledge of your particular area of expertise. So what is the difference? Building a following.

If this idea interests you, stay tuned. I just might be promoting something that will help you build your own following and reach more people...for you...and for the amazing work that we do.